“Put your arms around my soul, And take it dancing...”Fantastic Place 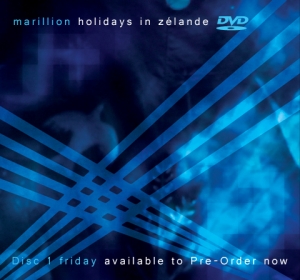 We are pleased to announce the imminent release of the first DVD of the 3 nights that we filmed at the Marillion Weekend in Holland 2011.

The entire Holland Weekend will be released as a series:

Due for release on Monday 7th November: Disc 1, Friday night (including the whole of Holidays in Eden) is available for pre-order now!
http://www.marillion.com/shop/dvd/zelande.htm

The Saturday and Sunday night DVD’s will be released separately in early and mid 2012 respectively.

The first Friday night DVD will come in a package that will hold all the
DVDs for each night. This packaging will ONLY be available when you purchase
the Friday Night DVD.
Once you have ordered the Saturday and Sunday night DVDs (when released),
they will be sent to you in clear plastic sleeves so you can add them to this
package.
There will be a Bluray release on both NTSC and PAL and we expect this to be
available in October 2012. If you have purchased all THREE NIGHT DVDs from
us then you will be entitled to a discount on the Blu-ray.

And it looks and sounds bloody brilliant! It was filmed in HD and there will
be surround sound on all the DVD's. To complement each night’s DVD release
there will also be an audio CD release available to order at the same time as each
DVD.